Realty lender Altico Capital has said lack of funding triggered by IL&FS defaults, along with the realty market softening, led to its default on repaying external loans.

“A significant strain in short-term financing markets precipitated by the September 2018 default by IL&FS created a knock-on impact on other NBFCs and the real estate sector in general,” said Altico Capital in a statement.

The company had defaulted on its interest payment of Rs 19.97 crore, on the principal of Rs 347 crore, on a loan it had taken from Mashreq Bank.

The default has highlighted liquidity shortage in non-banking, which has also been grappling with costlier funds, since IL&FS defaulted on payments in September last year.

After Altico received a one-notch rating downgrade earlier this month, several of its lenders recalled a substantial amount of debt. The company said it did not have sufficient liquidity to honour its obligations in time. This led Altico to halt debt repayment to keep its business running and protect its stakeholders, the company said in its statement.

However, the company has begun negotiations with its lenders. In a presentation to creditors, Altico has sought signing the inter-creditor agreement (ICA), thereby gaining a moratorium on its debt obligations. The request to lenders includes allowing the company to continue as a going concern before and during the standstill agreement.

The Altico management is working in tandem with Alvarez and Marshal and Shardul Amarchand Mangaldas to carry out day-to-day operations including cash management and operations management to preserve value and work out alternative resolution plans.

According to the presentation given to creditors, the company has sought support in its effort to generate liquidity through monetisation and fund infusion.

“It is important that stakeholders give Altico and its advisors time to craft a plan that may maximise asset value, refrain from actions that exacerbate the liquidity problem and bear in mind the significant headwinds the real estate sector faces in India at the present time,” the company said. 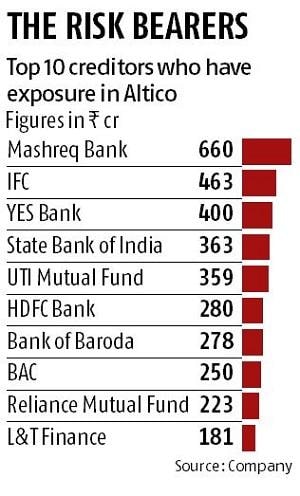 A few days after the default, the company’s chief executive officer, Sanjay Grewal, resigned and its chief operating officer, Sanjeev Agarwal, is running the firm.

The outstanding principal due to banks is Rs 4,362 crore. The lenders to Altico include Mashreq Bank, to which it owes Rs 660 crore. Others that have a significant exposure to the real estate financier are International Finance Corporation (Rs 463 crore),

More than 60 per cent of Altico’s exposure is to 10 developers, including Lodha, Vatika, Renaissance, Nirmal, and Phoenix. Altico’s loan book outstanding as of August 31 is Rs 6,648 crore, of which its exposure to the 10 developers is Rs 4,027 crore.

“While the company tried addressing the cash flow mismatch through various refinance/monetisation efforts, the net effect of repayments adversely impacted the liquidity position of the company due to lack of any new financing,” the company said in the presentation.